Prayers of a Father 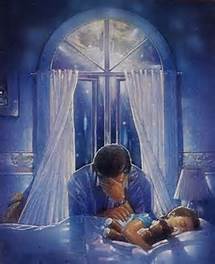 Therefore confess your sins to each other and pray for each other so that you may be healed.  The prayer of a righteous person is powerful and effective. - James 5:16

But I also never forgot what happened that evening, and the assurance I felt knowing my father was probably doing this on a regular basis.  It had such a big impact on me, that when I was graduating from college many years later, I bought him a framed copy of the picture you see here, of a father praying over his son.  You can also see on the other side of the window, an angel is fighting against a dark figure trying to get into the room.

When I presented the framed picture to him, I told him about the night many years ago when I had been awakened by his praying over me.  He didn't know I was awake, and didn't remember that particular night since he did the same thing so often.  I shared with him that this picture represents perfectly my memory of that night, and that I was thankful to have a father who was faithful in praying for his children.  We both wept in front of the large group of relatives who had traveled to Atlanta, Georgia to see me graduate, and it was a wonderful bookend to that season of our lives.

As I reflect on that event today, I wonder what my dad's prayers did for me as I grew up.  Did they prevent me from making bad choices when confronted with temptations in high school or college?  Was God honoring his faithful prayers when I changed my mind and went out with friends one Thursday night, only to meet my future wife at the place we visited?  What present and future parts of my life's journey will be impacted by the prayers of my father, mother, grandparents, and others who have prayed for me over the years, maybe even before I was born?

And now that I have children of my own, I make it a point to regularly visit their bedside while they are asleep, asking God for favor over their lives, for the love of God to fill their hearts with passion for Him, and for them to be the "head and not the tail, above and not beneath."  Maybe they'll wake up one night and know their father is praying over them, or maybe they will never know.  But the "prayer of a righteous person is powerful and effective", so I know I am making an impact on their lives and continuing the legacy of my father's faithfulness in prayer.


And this is the confidence that we have in him, that, if we ask any thing according to his will, he heareth us; and if we know that he hear us, whatsoever we ask, we know that we have the petitions that we desired of him. - 1 John 5:14-15

Focus on My Voice 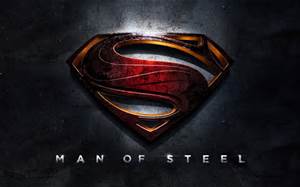 It seems strange to connect a message from God to a secular movie, but when I was going through a difficult season recently, that's just what I was given...

In the movie, "Man of Steel", featuring the superhero Superman, the young Clark Kent is struggling with the abilities he was given as an alien in another world.  While seeing in x-ray vision, hearing everything around you in a super sensitive environment, and having super strength seem like fun things to have, we learn that it takes time to adapt to these abilities, and Clark goes through a lot of teasing at school for not being "normal."

One day, while being bombarded with sensory overload at school, Clark bursts out of his classroom and locks himself in a closet, covering his ears and squeezing his eyes shut to the world around him.  The school calls his mother, who comes to the door of the closet to try to comfort her son.

"The world's too big, mom," cries Clark.  "Then make it small," his mother responds.

She then says, "Focus on my voice, pretend it's an island, out in the ocean.  Do you see it?"  Clark responds yes, and is able to focus on her voice and drown out the other noise around him.  He is also able to recall this moment later in the movie when faced with adversity, and is able to overcome the challenge with this focus. (You can see the exchange here)

I was facing a similar situation recently of feeling overwhelmed by life, with challenges at work, in my personal life, and with trying to figure out God's plan for my life.  I was so overwhelmed by worries that seemed to be coming from everywhere.  While kneeling by my bedside in prayer, I heard God say, "Focus on my voice."

Hearing the voice of the Father always brings relief into any situation, because with His voice comes peace, joy, and comfort.  His voice will always drown out the noise of everything else, if you focus on Him.  Jesus said, "and the sheep listen to his voice.  He calls his own sheep by name and leads them out." (John 10:3)

Does the world seem too big right now?  Then make it small.  Focus on God's voice, pretend it's an island, where only you and He sit, comforted by the washing of the waves, and the tranquility of God's presence.  He will lead you to "quiet waters."


"Here I am! I stand at the door and knock.  If anyone hears my voice and opens the door, I will come in and eat with him, and he with me." - Revelation 3:20