Are You George Bailey? 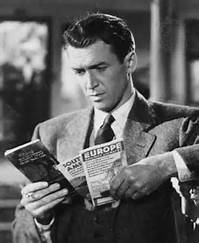 The movie It's a Wonderful Life is my favorite Christmas movie.  Released in 1947 and starring Jimmy Stewart, the movie centers around George Bailey, a fictional character who grows up in a small town in New York called Bedford Falls.  He has big dreams from an early age to leave the town and see the world.  He plans to become an architect and build incredible buildings, creating a life of adventure that the others in the town can only dream about.

But as the movie unfolds, George is prevented from leaving Bedford Falls every time he has the chance to do so.  First, his father dies as he is leaving for college, and he is forced, through his sense of duty and honor, to take over the family Building and Loan business.  As George is leaving for his honeymoon to finally get a chance to see some of the places he wanted to travel to, there's a run on the banks and he must use his honeymoon savings to save the Building and Loan in a time of crisis.  Finally, with the little money the family does have, they decide to use it to send George's younger brother, Harry, to college.  Harry ends up serving in World War II and becoming a war hero, earning the Medal of Honor.

As George watches his life's dreams pass him by, and others from Bedford Falls leave to find wealth and success elsewhere, George dutifully serves his town and helps the poorer families build houses, saving them from the local rich, wicked banker.  He marries a woman in town and has many children, when he hadn't intended on getting married due to his life ambitions.  But when his uncle accidently loses the Building and Loan's funds, everything George worked for seems to be lost, as he faces arrest and scandal.

George Bailey reaches his wit's end, and in thinking that the end may be near for him, he prepares to jump off a bridge outside of town, when an angel who has been watching George's life unfold saves him.  George tells the angel he wishes he'd never been born, because of the failures of his life, so the angel grants the request and shows him what the town of Bedford Falls would have been like if George hadn't been born.  It's a shocking reality, and George finally sees that he had a much bigger, better impact on the world than he ever realized.

I must admit that I have always related to George Bailey.  I have lived most of my life in the same city, although I went away to college and spent a couple of years in another city due to a work assignment.  Every time I lived away from "home", I loved the sense of adventure, the chance to see something new.  Now that I'm back home once more, I long for the chance to venture out again into the "wild" of a new and exciting place.  When I talk of leaving town, I tell my family (and myself), "I don't want to be George Bailey", knowing I only have a small window of time to see the world and take part in what I view as a true "adventure".

But what if that's not what God has called for my life?  Will I be content to make an impact from the place He may be calling me to serve?  What if, ironically, the real adventure is here?  Would I trade the opportunity to make a bigger, better impact at "home" for what could be a shallow and selfish experience somewhere else, that has little lasting result?  Like George Bailey, can you see the impact you've had on others' lives, that would be missing if you had never been born, or if you had chosen a different path than what you were called into?

Maybe you have had the same thoughts and frustrations.  Like George Bailey, you had dreams and desires that never came to fulfillment because honor and duty led you down a different path.  Or from a different view, maybe you've had the chance to travel the world, but you long for a place to call "home."  In either case, God has an adventure in store for you, and it may look different than what you have planned.  Open your heart to God and ask him to reveal your true calling and purpose, and God will faithfully show you that if you follow His plans for you, in the end you will be able to say, "It's Been a Wonderful Life!"


"God can do anything, you know—far more than you could ever imagine or guess or request in your wildest dreams!" - Ephesians 3:20 (The Message Translation)