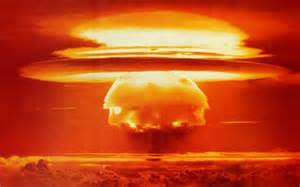 I was watching a television show recently about the period of time in United States history when the government tested atomic bombs in Nevada.  It was interesting to learn how atomic bombs don't get their power from the large plume of smoke that rises into the atmosphere; while that may be dazzling to see visually, the real devastation comes from the shock wave that screams across the landscape at over 500 miles per hour.  You've probably seen the videos of the effects of these shockwaves, which instantly raze buildings to the ground with forces many times stronger than a hurricane.

Amazingly, the very next day after watching this show, I was viewing an episode of Sid Roth's TV show, It's Supernatural.  Sid was interviewing a man who had a near-death encounter with Jesus as his body was laying on an operating table.  Jesus took the man to the Nevada desert, where He asked the man to pray.  When the man prayed, an atomic bomb exploded in front of them, just like the tests in Nevada.  Jesus explained to the man, "Do you see the shock waves coming from the blast? Your prayers are like these shock waves in the spiritual world!  They are demolishing strongholds with the force of an atomic bomb!"

My body got chills as I sat listening to this testimony.  Since I had just seen another show on this same topic the day before, it was very clear to me that God was sharing an important insight with me, one that greatly encourages me to know that my prayers have that kind of effect.

I think we all like the tangible, visible experiences we can have with God - the witnessing of physical healings, financial blessings, the warmth of God's presence, and the like.  But many times, at least in my experience, prayer takes work and commitment, because we don't always see an immediate, tangible result.  Our prayers may be impacting our children or grandchildren many years from now, or people across the world that we will never meet or even know.  I envy intercessors who spend time in constant prayer, with the faith that they may not see the result of their prayers in this lifetime.  I'll admit it takes more work for me because I like to see that what I'm doing is producing results that I can see, touch, and feel.

But this is why I believe Jesus so clearly showed me the analogy of our prayers being like atomic bombs, and wants to encourage all of us to use this incredible weapon called prayer. Atomic bombs are the most feared weapon in our world, and the same can be said about our prayers in the spiritual world.  The enemy fears our prayers, and prayer produces amazing results.  I challenge you to pray as much as possible, even when you may not see the results of your prayers in your lifetime.  You are sowing seeds that will bear fruit in due season, and you are helping win battles in unknown places, on this earth and in the spiritual realms!


"For though we live in the world, we do not wage war as the world does.  The weapons we fight with are not the weapons of the world. On the contrary, they have divine power to demolish strongholds." - 2 Corinthians 10:3-4

"And pray in the Spirit on all occasions with all kinds of prayers and requests. With this in mind, be alert and always keep on praying for all the Lord’s people." - Ephesians 6:18