The Power in God's Silence 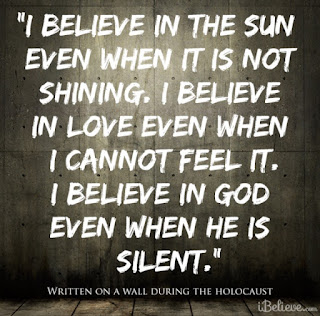 My wife and I had a difficult journey trying to start a family.  It took us almost five years to have our first child.  Then we lost twins, a boy and a girl, at 19 weeks of pregnancy.

After this extreme loss, God quickly responded by giving me promises of another child.  In my despair and mourning, He pointed me to a story from the book of Genesis in the Bible, where Adam and Eve had Seth after losing Abel.  He showed me the story of King David, who lost a child and was comforted by the birth of another son, Solomon.  With these promises in hand, it was so amazing, but not all that surprising, when we learned that my wife was pregnant again only six weeks after losing the twins.

But after a smooth first 24 weeks, complications arose.  My wife was monitored for contractions in the emergency room, and she had to go on bed rest for the remainder of her pregnancy.  We had many touch and go moments, with frequent visits to the ER where we thought we may lose our baby.

I started to doubt the promises I had been given from God, and wondered if I had heard Him correctly. I decided to fast one day, and during that day, I waited for a word from God.  I was looking for something, anything to show me that God was still there, that I had heard from Him and this baby was going to be okay.

But there was silence that entire day and evening.  I didn't hear anything, and nothing came to mind.  It was strangely silent, even purposefully so.

As I got up from my knees to close out my final prayer time that day, I was left with the strong impression that God was telling me He had nothing more to say about the matter - He had already given me His promises.  I was now to trust Him at His word.

As you would expect, my son is six years old today and doing great.  It was a difficult journey, but we are enjoying the family God promised us.

It's okay to ask God for confirmation, and there are many examples in the Bible of God confirming what He has spoken to someone.  But what if He is silent?  Do you still trust Him to fulfill the promises He has laid on your heart?

It may take longer than you expect to see God's promises fulfilled, but He is ALWAYS faithful to complete it.  Abraham had to wait 20 years after God told him he would have a son, before Sarah gave birth to Isaac.  It took many years of hardship for David to see God's promise of kingship come to pass.

Even though God may appear to be silent, He is ALWAYS active, ALWAYS at work in bringing you to the fulfillment of His purposes and promises for your life.  Silence does NOT mean inactivity.

Trust God in the silence  - there is power in the silence, and He will honor your trust with the right answers at the appointed time!

"Being confident of this, that he who began a good work in you will carry it on to completion until the day of Christ Jesus." - Philippians 1:6

P.S. Ironically, right after I posted this article, I saw a preview for a new movie coming out in 2017 called "Silence," about two Jesuit priests who travel to Japan to find their mentor, and face persecution in sharing their faith.  In the preview, one of the priests expresses frustration about only hearing silence in the face of his struggles. It looks good, check out the preview here!