Ever Be - Will You Answer the Call? 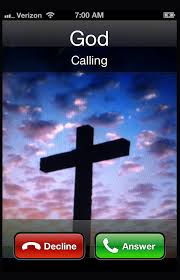 Free will is a great gift that can be unappreciated or misunderstood at times.  Many of us watch as others come up with great ideas or ministry opportunities that turn into whatever definition of success we have (fame, fortune, a big church following, God's favor, etc.).  We think "why can't I ever get that lucky break?"  or "Hey, I had that idea too a few years ago, why didn't I take action on it?"  We then blame God for showing favoritism to others or not giving us the same opportunities, when in fact we should be taking accountability for own inaction when God did open the door.  He gives all of us a chance to work in our calling and purpose in partnership with Him, but few are obedient to the call.

A small example of this in my own life was a day when I heard the song "Ever Be" by Aaron Shust.  It's still one of my favorite songs, and that day I felt the impression that I should share the song on social media because someone else needed to hear it.  Being new to the social media world and still worrying about how many "likes" I got from posts, I noticed that nobody had "liked" the post after several hours and removed it, being embarrassed at the lack of response.

But the following day, I saw the exact same post from another person, who said they felt led to post the song "Ever Be" for someone to hear.  It instantly made to realize that if I'm not willing to be obedient to something God had assigned to me, He would find someone else willing to take the risk.

In a bigger example, Darren Wilson, a filmmaker who has produced several documentaries such as Finger of God, Father of Lights, and Furious Love, tells a similar story in his book, Finding God in the Bible.  He had never made a movie before but was obedient to God's calling to do so.  This has led to incredible success as his movies have made an impact across the world.

Darren writes in his book, "When He asked me to start making a crazy movie about miracles, I was at my lowest point and honestly had nothing to lose by stepping out.  It was only years later that I began receiving emails from producers and directors around the world - people who had far more talent, resources, and ability than me - admitting to me that for years God had been asking them to make a documentary about the things He's doing around the world, yet because of reputation, finances, schedule, fears, or whatever other excuse they could come up with, they all put it off or said no.  Then they looked up and saw that here I had done it.  Little old me with my borrowed camera and $20,000 budget.  I was not God's first choice for this.  I was simply the one guy dumb enough (or smart enough) to say yes."

What has God put into your heart to do? What excuses are you making to not take action? It may be something as small as paying for the person behind you in the drive thru line, but that one act of obedience will open the door to more, as God now sees He can trust you with bigger and bigger assignments.  He has big plans for each of us, if only we will realize we have the choice to take action, to take the leap into the unknown.  You'll be in for a fun ride if you will only say "YES"!


P.S. Check out Darren's movies and other projects at wpfilm.com.