What's In It For Me? 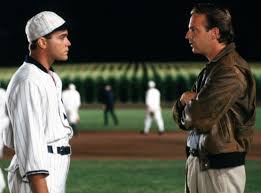 "These were all commended for their faith, yet none of them received what had been promised.  God had planned something better for us so that only together with us would they be made perfect." - Hebrews 11:39-40


In the movie "Field of Dreams," the main character, Ray Kinsella, played by Kevin Costner, hears a voice while walking in his Iowa cornfield.  The voice says, "If you build it, he will come," and Ray sees a vision of a baseball field and the deceased ballplayer Shoeless Joe Jackson.  Assuming this means Shoeless Joe Jackson will appear if he builds a baseball field, Ray is obedient to this strange calling, in spite of financial difficulty he is already having at his farm and the ramifications of this request.

As other farmers watch in shock and he becomes the joke of the community, Ray tears up much of his revenue-producing farmland to build a baseball field, putting him and his family into near bankruptcy.  Shoeless Joe Jackson and other deceased ballplayers do appear at the field, and Ray hears more instruction from the voice that guides him on an incredible journey across the United States.

The problem is, all of the voice's instructions are benefiting others, while Ray and his family are suffering severe financial loss.  Since others can't see the deceased ballplayers, everyone thinks Ray and his family are crazy, and his brother-in-law moves to foreclose on the property.  When a person Ray brings to the field at the instruction of the voice gets invited by Shoeless Joe to see what lies on the other side of the field, Ray finally shows his frustration and asks why he doesn't get to go.  Shoeless Joe calmly answers, "Because you weren't invited."

Shoeless Joe then asks, "Is that why you did this - for you?"  It stops Ray dead in his tracks, and you can see the look of guilt during the awkward silence as he realizes the selfishness he's had all along in pursuing this Field of Dreams.  While on the surface it appeared that Ray was being a risk-taking, obedient servant of the voice, helping ballplayers and others live out their dreams, he was secretly waiting to see what was in all of this for himself.

This is such an important revelation and checkpoint for all of us in our walk with God the Father, Jesus the Son, and the Holy Spirit.  As you seek a closer relationship with the Trinity, you may be asked to do things that don't make sense.  You may be asked to help people in unique ways.  You may be given assignments to evangelize to others, preach the Gospel, or heal the sick.  But even if you are obedient to these assignments, what motivates you to do so is equally important.  Are you really being obedient so you can serve others and show God's love to the world, or are you being driven by the potential rewards for doing so?

Of course God promises blessings to those who are obedient to His calling, but they don't always look like what you expect.  His blessings may impact your children, or your grandchildren, or other people you may never meet or know.  You may never see the full fruits of your obedience in your lifetime.  The key is trusting God when asked to take on an assignment, regardless of what's in it for you.

In the end, Ray does get an unexpected benefit as he learns that it's really his deceased father who will come if he builds the field, and a father and son get to experience reconciliation in a tearful ending.  But the bigger lesson for Ray, and for all of us, is that we should always joyfully obey our Father's instruction regardless of what's in it for us.

Jesus was the ultimate example of this when he willingly died on the cross at God's instruction, without asking, "What's in it for me?"  And mankind benefited most of all when we inherited eternal life through Jesus.

So what's in it for us? That's the beauty of Christ - we've already received the free gift of redemption and eternal life in heaven with Him if we accept Jesus as our Savior.  Our job is then to simply "go and make disciples," bringing others to the real Field of Dreams - an eternal relationship with God our Father, Jesus Christ, and the Holy Spirit!


Jesus called them together and said, "You know that those who are regarded as rulers of the Gentiles lord it over them, and their high officials exercise authority over them.  Not so with you.  Instead, whoever wants to become great among you must be your servant, and whoever wants to be first must be a slave of all.  For even the Son of Man did not come to be served, but to serve, and to give his life as a ransom for many." - Mark 10:42-45

Posted by Adam Gellert at 3:50 PM No comments: