The Visit From God: A Message From A Watchman 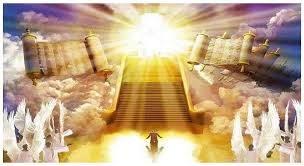 "Jesus replied: "A certain man was preparing a great banquet and invited many guests.  At the time of the banquet he sent his servant to tell those who had been invited, 'Come, for everything is now ready.'  But they all began to make excuses.  The first said, 'I have just bought a field, and I must go and see it.  Please excuse me.'  Another said, 'I have just bought five yoke of oxen, and I'm on my way to try them out.  Please excuse me.'  Still another said, 'I just got married, so I can't come.'  The servant came back and reported this to his master.  Then the owner of the house became angry and ordered his servant, 'Go out quickly into the streets and alleys of the town and bring in the poor, crippled, the blind and lame.' 'Sir,' the servant said, 'what you ordered has been done, but there is still room.' Then the master told his servant, 'Go out into the roads and country lanes and compel them to come in, so that my house will be full.  I tell you, not one of those who were invited will get a taste of my banquet." - Luke 14:16-24


Last night I had such a vivid dream with an important message for everyone, that I had to share in the hopes this touches someone.

In my dream, God himself came down to earth and "held court," inviting everyone to come to a specific location and meet with Him. He was looking forward to "checking in" and seeing how each of His children was doing.  It was not the end times or final judgement, just an opportunity for anyone who wanted to meet with God to do so.

The interesting and sad thing was, many people did not want to come, and did not come.  They were too embarrassed or ashamed to face God, for a variety of reasons.  They didn't want to face Him given their shame and lack of repentance for their many sins.  They didn't want to face Him because of a lack of relationship with Him, or having to admit during their check-in that they hadn't been obedient to God's calling on their lives.  Others had not done all they could be doing to share the message of the Gospel and bring others into relationship with Him. I was also somehow aware that members of my own family chose not to go.

Even I was hesitant to go, for the same reasons.  But I mustered up the courage to face God.  I made my way to a large parking lot, where I could see many people walking into a large building.  The glory of God emanated brightly through the roof and beamed like a beacon into the sky.  I could begin to feel God's presence, in the same way I met God in a dream years earlier.   And among the crowd, I somehow perceived that many people from my church were there. And then, before the dream went any further, I woke up.

The dream was not really a joyous one, as I was saddened to think about the many people, known and unknown, who chose not to meet their Father and Creator when the opportunity arose.  I believe it was a message of urgency, as Jesus is coming soon to bring His people into the promise of eternal life at any time.  And when He does, will you be prepared (and excited) to see His coming, or will you be ashamed, fearful, or regret that you didn't have a chance to do all the things you could have or should have done during your lifetime?

The good news is, this is not a message of condemnation or judgement! The message of Jesus is one of redemption and forgiveness.  The simple solution for being able to face God with confidence, is to accept Jesus as your Lord and Savior, and through His blood and sacrifice, you are forgiven of your sins and put on a white robe of righteousness in God's eyes.  You don't have to live in shame or fear of judgement for your sins, because "all have sinned and fall short" (Romans 3:23), but Jesus wipes us clean. As Romans 8:1-2 says, "Therefore, there is now no condemnation for those who are in Christ Jesus, because through Christ Jesus the law of the Spirit who gives life has set you free from the law of sin and death."

And if you are saved and still couldn't face God because you aren't living in obedience to His will, it's not too late to get back on track.  We are all called to tell others about the Good News of Jesus, and the harvest is ripe.  This isn't about performance and we don't have to bring others to Christ to be saved, but all who know Him understand the desire that is placed in our hearts to share the Good News with others, and walk in obedience to His will.

In one of the documentary movies by Darren Wilson and Wanderlust Productions, a pastor said he wanted to be able to face Jesus at his death and entry into heaven and pick up right where he left off on earth.  If Jesus is your best friend, I imagine that first moment in heaven to be the same reaction that a child has when he rides a roller coaster for the first time - he jumps off the coaster and excitedly jumps into his father's arms, saying "That was awesome, can we go again!?"

If you don't think that will be your reaction to your relationship with God, and his Son Jesus Christ, now is the time to make a change.  Ask Jesus into your heart and surrender your life to Him, and pursue a deeper relationship with Him in obedience to your calling and God's will for your life. And you'll jump at the chance to see God if He came today and invited you into His loving arms!


"Then the angel said to me, "Write this: Blessed are those who are invited to the wedding supper of the Lamb!" And he added, "These words are the true words of God." - Revelation 19:9