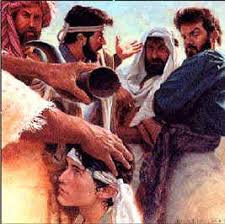 "When they arrived, Samuel saw Eliab and thought, "Surely the Lord's anointed stands before the Lord.  But the Lord said to Samuel, "Do not consider his appearance or his height, for I have rejected him.  The Lord does not look at the things people look at.  People look at the outward appearance, but the Lord looks at the heart."  -1 Samuel 16:6-7

When my oldest son got into his preschool years, we started getting feedback from teachers that he was behind developmentally.  As a parent we typically see nothing but the amazing things our child is doing as he or she grows, and how "brilliant" they appear to be for their age.  But then reality can sink in when they are grouped with other kids, and teachers who have seen hundreds of kids come through their classes see their strengths and weaknesses, and paint a more realistic picture.

Year after year, we had somber meetings with teachers and staff, as they expressed concern over our son's development, both academically and socially.  He was held back in kindergarten, and even then his scores were lower than average.  I had always done well in school, so this whole experience was foreign to me.  I was just happy to see him get a passing grade on a test, much less an A or B.  Instead of eagerly anticipating reports from school on his academic and social achievements, I was relieved if we didn't hear anything for a period of time, because no news was good news.

One night a few years ago, as I was thinking about my kids' futures and resigning myself to my oldest son's mediocrity (at best), God said to me, "Don't discount your son.  I have special plans for him too!"

It was both an encouragement and admonition as I realized that I had discounted my son. It didn't mean I loved him any less or that I wasn't going to do everything I could to give him the best life possible.  But I had given up hope for a bright future based on how the world saw my son, and I had accepted it.

Thankfully, his Creator, the One who gave my son life and an exciting future filled with a powerful destiny and amazing adventures, never discounted him.  As much as a parent can (and should) have a positive influence on a child's life, and God wants us to steward our children well, He doesn't need us to fulfill His purpose for our children.  We can look at examples of people from all walks of life, with both good and bad parents, easy or hard situations, come into God's purpose for their lives because of the individual relationships they pursued with God, and more importantly, God's pursuit of them.

Since that message from God, I'm happy to report that my son is doing great in school, and socially with many friends, as he is developing into who God created him to be.  And last year he asked to be baptized and accepted Jesus as Lord!  I can't say that I'm doing much if anything to contribute to his current success, so I know that God is at work in my son in ways I'll never know.  And I'm comforted knowing that a Father who knows and loves my son even more than I do is in control of his destiny, and I'm just here to help steward him on the journey.

I hope this message serves two purposes - first, to make sure you don't discount your children. If you see your kids the way God sees them, you wouldn't ever have a need or desire to do so.  And secondly, if you grew up in a home where your parents discounted you, or favored another sibling over you, know that your future isn't determined by your earthly parents.  It's determined by God your Father, His Son Jesus who saw so much value in you that he chose to die for you, and the Holy Spirit that is excited to fill you with His presence and guide you into your destiny as a child of the King!


"And we know that in all things God works for the good of those who love him, who have been called according to his purpose.  For those God foreknew he also predestined to be conformed to the image of his Son, that he might be the firstborn among many brothers and sisters." - Romans 8:28-29