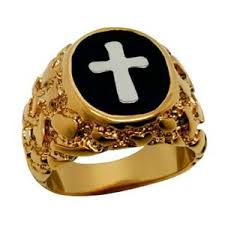 During some morning worship time last Saturday morning, I listened to a song and raised my right hand into the air in praise.  Since seeing a vision of God's throne room a few years ago, I often imagine His throne room when seeking to hear from God, and He has shown me some amazing revelations.

This time, when going to this place, I saw Jesus reach for my raised right hand, and put a ring on my finger!

I understood it to be a signet ring, like the ones kings gave people in the Bible when they were granting them their authority as king.  Researching further, I learned that signet rings have been used since the Old Testament times as a personal signature or symbol of family heritage.  Ancient kings used signet rings to designate authority, honor, or ownership.  For example, there are several Bible references to signet rings:

What an empowering feeling to know that God has given me His signet ring, as a symbol of His authority, honor, and ownership of my life as a bride of Christ.  All who accept Jesus as Lord are given this same ring, and like those who were given signet rings in the Bible, there is an expectation that we are to do something with that authority!

What are we supposed to do?  In Matthew 10:1, "Jesus called his twelve disciples to him and gave them authority to drive out impure spirits and to heal every disease and sickness."  And Matthew 28:18-19 says, "Then Jesus came to them and said, 'All authority in heaven and on earth has been given to me.  Therefore go and make disciples of all nations, baptizing them in the name of the Father and of the Son and of the Holy Spirit.'"

We are called to GO, and with rings on our spiritual fingers, we are recognized as members of God's family with His authority as sons and daughters of the King.  The next time you are nervous about talking to others about Jesus, or praying for someone's healing, imagine that ring on your finger, and the authority it represents.  You are a child of the King - hold your head up high and show the world what that means!

"Very truly I tell you, whoever believes in me will do the works I have been doing, and they will do even greater things than these, because I am going to the Father." - John 14:12