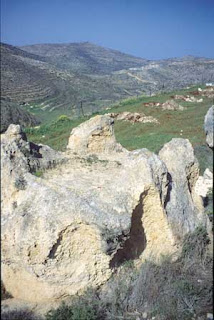 In the second year of Pekah son of Remaliah king of Israel, Jotham son of Uzziah king of Judah began to reign.  He did what was right in the eyes of the Lord, just as his father Uzziah had done.  The high places, however, were not removed; the people continued to offer sacrifices and burn incense there." - 1 Kings 15:32, 34-35

In reading through the Old Testament recently, one thing the Lord pointed out to me from the history of the kings of Israel was the differences in how closely they walked with the Lord, especially with removing the "high places."   Even those kings who were described as doing right and serving the Lord were called out for not removing the high places.  Here are some examples:


There were some kings that did take the step of removing the high places, including Hezekiah:

And what about the New Testament? Even the devil understood the significance of high places when he tempted Jesus in the desert: "The devil led him up to a high place and showed him in an instant all the kingdoms of the world." (Luke 4:5)

So why are the high places so important to God and in Scripture, where they are mentioned 117 times? And how can this apply to us today?

The "high places" were originally a tradition from the previous inhabitants of the promised land, and when the Israelites entered the land, God commanded them to "destroy completely all the places on the high mountains, on the hills, and under every spreading tree, where the nations you are dispossessing worship their gods." (Deuteronomy 12:2) Keeping the high places or setting up new ones meant turning from God to worship idols, which constituted adultery and a lack of full trust in God.

King David was the gold standard in having a heart devoted to the Lord.  But starting with his son Solomon, who buckled under the pressure of foreign wives to build altars to their gods, Israel spiraled downward into a black hole of idol worship and setting up altars on high places throughout the land.  And while some kings over the course of Israel's history turned from the evil ways of their fathers and grandfathers and made an effort to serve the Lord, very few had the courage to make the full effort in removing the high places. And because of this decision, God was not able to fully bless them as He did David, or kings like Hezekiah, who did go "all in" with their commitment to the Lord.

Why did even the "good" kings seem to struggle with this one area? I believe they knew better, but felt the pressure of the popularity of these high places in their culture, and they were afraid of losing favor with the people in making what would have been an unpopular decision.  There were likely many influential priests and other leaders who benefited from these high places and the many people that visited them. So what's the harm in keeping them around with all the other good they were doing for the Lord?

Does this sound familiar in today's world? While we don't have physical "high places," the world puts pressure on us to follow popular culture in failing to stand against the things that set themselves against a holy God.  We all have an opportunity through reading the Word, accepting Jesus Christ as our Savior, and following the prompting of the Holy Spirit, to lead a life that is fully committed to the Lord.  But we also all have "high places," some more obvious and some more subtle, that keep us from being a David or Hezekiah and making the hard choices in removing these high places from our lives.

So what are examples of today's high places? While many are obvious, the more subtle ones can be the priority we place on our children or family, our careers, our ministries, or our standing at church.  It is also not taking a stand against the world views of today around sexual orientation/gender identity, a focus on money, and other areas of popular opinion that may impact your reputation or popularity.  The first commandment is to love God with all your heart, soul, and mind, and a high place draws us away from full devotion to the Lord.

What high places do you have in your life? Ask the Holy Spirit to reveal this to you, and seek for understanding in the Bible.  Let the Trinity help you remove these high places, so you can live a life in closer relationship to the Lord, with full obedience and commitment to Him!


"Therefore God exalted him (Jesus) to the highest place
and gave him the name that is above every name..." - Philippians 2:9