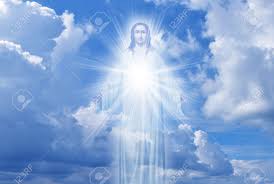 "But God demonstrates His own love for us in this: While we were still sinners, Christ died for us." - Romans 5:8

I've been fortunate to experience many amazing dreams and encounters with God during my lifetime, but the first dream I had as a child still stands out clearly today, and is an encouraging message for all of us as to the truth and salvation we have in Jesus Christ.

I used to play hockey growing up - this is only unique because I live in Texas, and hockey wasn't a big sport during that time in the early 1980s.  But my dad is Canadian, so naturally my brother and I were signed up to play in a local youth hockey league.

In my dream, I was skating at a public ice skating rink, when I suddenly realized that everyone around me was an "evil" person.  For some reason I could tell they were all criminals and other corrupt people, and I was scared to be there.  Then, we all instantly dropped down into hell, like the floor dropped out from under us, and we were all in free fall down into the fiery depths of the earth!

Obviously mortified, I cried out to God that He had made a mistake.  I had been at the wrong place at the wrong time, and didn't deserve to be in hell with the others I was with at the skating rink.  As I cried out for help, trapped for eternity in a place I didn't belong, an elevator came crashing down in front of me, almost like something from a cartoon.  I immediately recognized it to be a ticket out of this horrible place, so I jumped into the elevator.  The elevator then shot up and out of hell, and catapulted me into the sky, where I was ejected from the elevator and was able to fly among the clouds.  As my fear was replaced with joy, peace, and happiness, I flew up to a huge cloud that formed the letters J-E-S-U-S.  Knowing that He was responsible for my ascension out of hell and entry to this wonderful place, I said, "I love you, Jesus!"  I then woke up from this very vivid and impactful dream, with Jesus' message of love and salvation being implanted into my heart, and I felt a love I had never felt before.

As a reflect on this dream as an adult, I realize now that the dream meant something different from how I viewed it at the time.  I thought I didn't deserve to be in hell with all of the "bad" people I was with at the skating rink.  That I was somehow "better" than them and undeserving of my fate.  But in reality, everyone is created with a sin nature and deserving of separation from God. And over my lifetime I have sinned enough to be lumped in with rest of those I was with in my dream.  I think one of the biggest issues we have today is the judgement of others for their sins and faults, when relative to a holy God, none of us can earn our salvation.  But that should be a relief to all of us - instead of having to do anything to earn that elevator rode from hell to heaven, Jesus gives us the gift of salvation through his own death and sacrifice, and the ride to eternity with Him is free!

Will  you accept this truth and get on the free elevator out of hell and into heaven? Will you accept that there is no "elevator" of salvation apart from Jesus?  You can then stop worrying about how you are going to be able to escape death and enter into the joy of eternal rest - just get on Jesus' elevator to the glory of God's presence!


Posted by Adam Gellert at 3:54 PM No comments: