The Blessing of Alzheimer's Disease 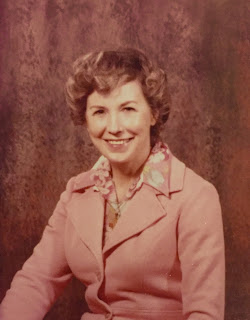 Back in June, I featured my grandmother, Byrdeen, in another blog post titled "My Elijah".  She was an anchor of faith in my life, and was my "go-to" spiritual counselor throughout my childhood and early adulthood.  Byrdeen had such a close relationship with the Lord, that I can't recall too many conversations when He didn't come up.  She was "activated" in her faith, and was really on fire for God.

Grandma also loved her children and grandchildren very much, and I can recall her always asking us, "You know how much we love you, right?"  Unfortunately, I also remember rolling my eyes at how often she would ask us this question, and in my immaturity as a teenager I would grudgingly respond, "Yes, Grandma, I know..."

But in her last several years, Byrdeen was overtaken with Alzheimer's disease, a terrible disease that gradually degrades a person's memory and identity, and is a trying experience for the person, his or her spouse, and family members.  For me, it started with noticing that Grandma was forgetting things frequently, and I found myself repeating things I had told her.  We took her in for testing, and the doctors confirmed she had Alzheimer's.  My grandfather suffered terribly from watching her slowly fade from an amazing spouse and life partner for many decades, to someone that needed constant care and attention.  Over the years, she went from forgetting things to not even knowing who you were when you walked in the door.  It's such a sad and shocking thing to have someone that close to you not know who you are, and you know that any interaction you have with her that day will be forgotten the minute you walk out the door.

My grandfather died unexpectedly in 2000, so the burden was then put on my parents to take care of Grandma.  The money my grandparents had saved eventually ran out, so the financial burden was placed on my parents to help pay for her care, which only added more insult to the emotional injury of watching your mother slowly slip away.

In her final few years, we were fortunate to discover that the Department of Veteran's Affairs had a benefit that helped pay for her care since my grandfather was a military veteran (she was featured on NBC News here).  This allowed us to move Grandma into a senior care facility.  She had been cared for previously by a family friend, and hadn't gotten much exposure to other people and a more active life.

Grandma immediately took to the new facility, and she was able to enjoy a constant flurry of activity with church services, games, and frequent interaction with others.  Even though she still suffered from Alzheimer's, she was able to make friends and interacted well with the staff.

Then an amazing thing happened.  My grandmother died one day of heart failure.  When we attended her funeral, many of the facility's staff were on hand for the service.  After some members of the family spoke, several of the staff members got up to speak, one by one, sobbing as they talked about what a big impact Byrdeen had made on the people and staff at the senior living facility.  Even though she had lost many of her mental faculties, Grandma had never lost her faith in God, and was able to sing along to all the church hymns being sung at the services they held.  She would compliment everyone she saw on how beautiful they looked, and how happy she was to see them.

One lady in particular, who would not have been seen as attractive by worldly standards, told us that Grandma would always tell her how beautiful she was when she saw her, and it was the first time in her entire life that someone had said she was beautiful.  It brightened not only her day, but also changed her life.

I sat in the service, amazed that people who see death every day in that facility, and probably become somewhat numb to the many people who come and go from that place, were so grieved by the loss of my grandmother. It was obvious that she had made an important impact on the lives of the people there.  And lives were changed because of her being placed in that facility.

So what's the take away from this story? God has promised us that He will turn ashes into beauty (Isaiah 61:3).  It doesn't mean that He allows or makes bad things happen to manipulate events into His desires - that lie makes many people skeptical of God and His goodness.  What it means is that God takes the bad things that happen in this fallen world and turns them into good, according to His will and perfect timing.

My family had a hard time understanding why someone who was so faithful to God for her entire life had to suffer through her final years with Alzheimer's, and cause the suffering of my grandfather and other family members. But I'm convinced that, knowing my grandmother, she would choose to have the same experience again knowing the impact she was able to make at that senior care facility in her final years.  And someday, when we are able to see the tapestry of our lives in heaven, we will all say "Amen" when we see how all of life's events, good and bad, were able to be turned into beauty by the amazing Creator of the universe.

I hope this word encourages you today, and if you or someone you know has Alzheimer's, my prayers are with you that God will turn your ashes of this experience into beauty.


"To all who mourn in Israel, He will give a crown of beauty for ashes, a joyous blessing instead of mourning, festive praise instead of despair.  In their righteousness, they will be like great oaks that the Lord has planted for his own glory." - Isaiah 61:3